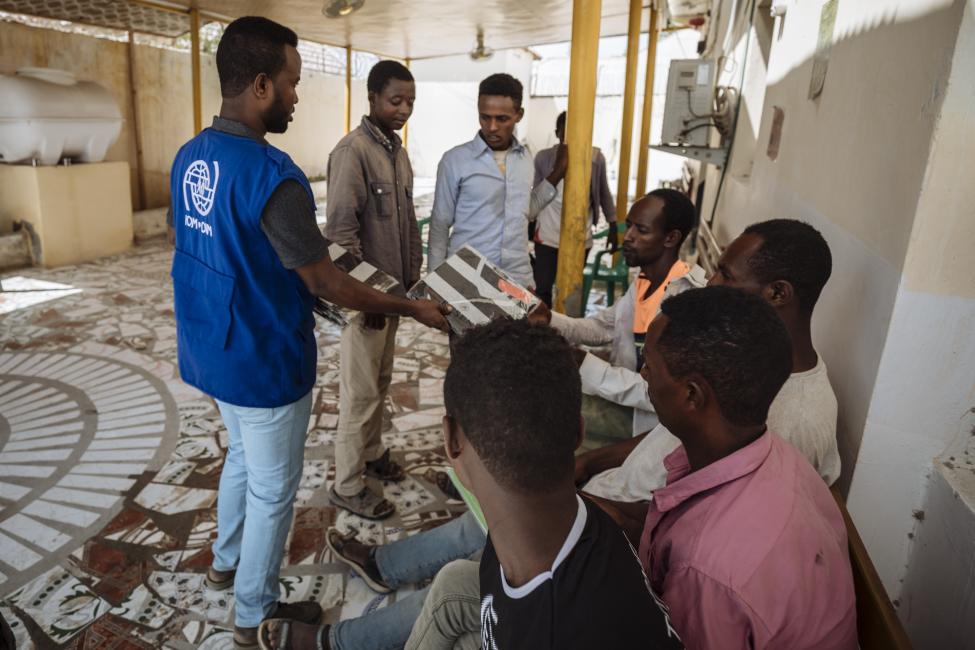 Bossaso, Puntland – Hundreds of migrants are stranded in Bossaso, Puntland, Somalia, as a result of border and sea-crossing closures brought on by the COVID-19 pandemic.

Every year scores of migrants, mainly from landlocked Ethiopia, pass through Bossaso seeking to cross the Gulf of Aden to war-torn Yemen, and hoping to proceed onward to Gulf countries, particulary Saudi Arabia. The International Organization for Migration (IOM) reported that one day last month, approximately 600 migrants reached Bossaso in Puntland, in a single day.

IOM data show that migration in the Eastern route is still taking place despite the new border restrictions in the region. In comparison to data collected in the first half of April in 2019, there have been 501 more arrivals in Bossaso, but departures have fallen, with 8,261 less migrants trying to cross the Gulf of Aden during the same dates.

While more people continue to arrive in Bossaso, higher number of Ethiopian migrants are stranded in the city. IOM estimates that nearly 400 migrants are currently hosted by members of the Ethiopian community living in informal settlements around the city.

Fassil, aged 19 is a migrant from Tigray region in Ethiopia, now living amid the Ethiopian community in Bossaso. “I have been here for around three months,” he said. “The coronavirus has changed everything. I cannot continue, I cannot go back because all borders are closed.”

After a lengthy journey – likely exposed to violence, abuse and exploitation – migrants face precarious conditions in Bossaso, where they often cannot access water, sanitation, shelter or food upon arrival.

IOM, thanks to the Danish International Development Agency (DANIDA), the EU-IOM Joint Initiative and the Migration Resource Allocation Committee (MIRAC), is helping Fassil and migrants like him. These partners in Bossaso provide direct assistance and basic health services through the Migration Reception Centre (MRC), a drop-in centre for migrants. Among other activities, water is distributed weekly to migrants stranded in informal settlements.

“We do our best to help them in coordination with IOM and local authorities; however, if their numbers increase, and they cannot cross the sea due to the closure of borders, their well-being will be in great danger,” explained Ahmed Shirie, the Chairman of the Ethiopian community in Bossaso.

Since the first case of COVID-19 was confirmed in Puntland on 19 April, stranded migrants in Bossaso also began facing more stigma and abuses due to misinformation. There have been several social media posts blaming migrants for being carriers of the virus who are responsible for local transmission. So far no migrants have tested positive in Puntland.

“IOM is concerned about the stigma that many migrants are facing since COVID-19 started to spread in the region,” said Isaac Munyae, the Programme Manager of the EU-IOM Joint Initiative for Migrant Protection and Reintegration in the Horn of Africa, which has been assisting stranded migrants since 2017.

Fearing deportation from Somalia and the stigma linked to the surge of COVID-19, many Ethiopian women and children, now are attempting to return to Ethiopia.

IOM is working closely with Puntland authorities as well as with Federal Government of Somalia and the Office of the Special Envoy for Children’s and Migrants’ Rights to ensure that migrants have access to basic services, including health. IOM, in close liaison with the Federal Government of Somalia, is also advocating for non-deportation and for the safe and voluntary return of stranded migrants to their countries of origin.

One such would be returnee, Tarik, is a young woman from Amhara region in Ethiopia.

“I have been stranded in Bossaso for one month now,” she said. “Going to the Gulf was my intention, but I don’t have enough money and my family cannot support me. Now I want to go back.”