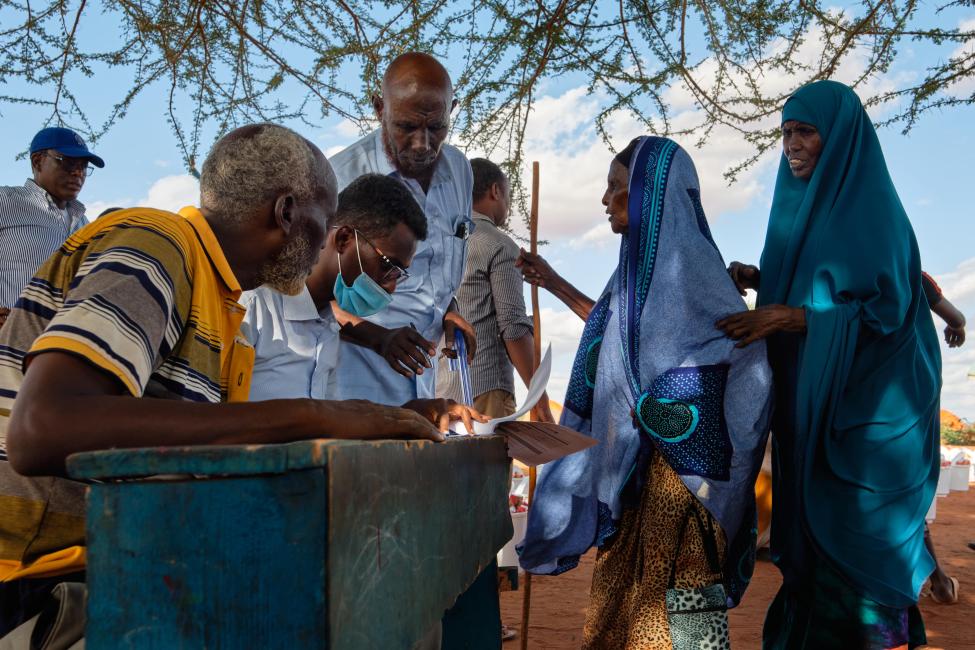 Mogadishu – 7.1 million Somalis - close to 50 percent of the population - are facing extreme hunger due to historic drought conditions. Nearly 800,000 people have been forced to flee their homes since 2021 in search of food, water and pasture for their animals. As part of a coordinated response, several United Nations agencies are piloting a Minimum Response Package (MRP) to avert famine by addressing the most pressing needs of those displaced by drought.

Since the onset of drought, people forced to flee rural areas have crowded into cities and towns in search of support, where they have settled in congested settlements and are now at risk of eviction and disease outbreaks.

This has placed additional pressure on already fragile services and infrastructure. Women and girls, who make up half of those displaced, also face a heightened risk of gender-based violence.

Through the MRP, United Nations agencies and partners aim to provide immediate life-saving relief for over 90,000 newly displaced persons who have arrived to Baidoa and Somalia’s capital Mogadishu in the last months in search of food, water and health care.

The assistance will be tailored to the needs of men, women and children and will include cash, water trucking, hygiene kits, shelter, nutrition programmes and health care. The MRP will also expand community level access to water, latrines, and health services through an area-based approach.

Following initial planning discussions in April, IOM began household registration in May. Over 114,000 extremely vulnerable IDPs have already been identified and registered as of June – surpassing the project original target due to growing needs. WFP and partners expect to be providing multi-purpose cash assistance to 70 percent of targeted families by the end of June, while IOM and UNICEF are planning water trucking activities and the distribution of hygiene kits to 57,000 displaced persons by next week.

“IOM is extremely concerned about the hundreds of thousands of people who have been uprooted due to the drought, most of them heavily depended on animals and crops. They have now lost everything,” said Frantz Celestin, IOM Somalia Chief of Mission. “The coordinated response we are providing through the MRP is critical to save lives and prevent what happened in the 2011 drought, when 260,000 people lost their lives.”

“With Somalia on the brink of famine, we need to act now – and act together – to avert a humanitarian catastrophe,” said El-Khidir Daloum, WFP Country Director for Somalia. “The MRP opens new pathways for partner agencies to work together in an integrated response, collectively empowering some of the most vulnerable people to meet their essential needs – not only food and nutrition but also shelter, hygiene and water. This is a very important pilot that will pave the way to scale up multi-sectoral responses into the future.”

Somalia is the most drought-impacted country in the Horn of Africa. The threat of starvation looms over the country while malnutrition cases are on the rise after the failure of the current April to June rains – marking the fourth consecutive rainy season for Somalia.

At least 1.5 million children are facing acute malnutrition and over 3,170 have contracted cholera, while 2,460 measles cases have been reported since January.

“In a country where famine is happening ever more frequently, we as the partners of Somalia need to find ways to help the country prevent famine,” said UNICEF Chief of Water and Sanitation Victor Kinyanjui. “The minimum response package has enabled UNICEF to provide lifesaving assistance to children and women affected by humanitarian crises in Baidoa and Benadir, working together with sister agencies IOM and WFP. I hope the lessons learned from this experience will be applied in other regions.”

Now, the region risks entering an unprecedented fifth consecutive failed rainy season, between October and December, compounded by Somalia´s decades-long humanitarian crisis, recurrent weather events, conflict, and economic challenges brought on by the COVID-19 pandemic and the Ukraine war, which could endanger the lives of tens of thousands of people.

“Lessons learnt from this pilot approach will not only inform the national expansion of this mechanism, but also inform the design and implementation of climate mitigation programmes in the future and promote investments in durable solutions to displacement in Somalia,” said Celestin.

Collectively, humanitarian agencies have reached over 2.8 million people between January and May 2022 with lifesaving and livelihood support. IOM, WFP, UNICEF and aid partners will continue working together to prevent a humanitarian catastrophe and help communities adapt to future shocks.

The MRP project is possible thanks to generous funding from the UK´s Foreign, Commonwealth & Development Office. The European Union and USAID's Bureau for Humanitarian Assistance (BHA) are also contributors to the project.

'Where Life Takes Us’: Photography Exhibition in Hargeisa Celebrates Migration in the Horn of Africa

Window of Opportunity to Prevent Famine in Somalia is Closing, Principals of Inter-Agency Standing Committee Warn